In early February, I went for an ultrasound scan, which revealed that I had a cyst in my right ovary that was  4cm large in diameter. I was quite alarmed and distressed as it was a large growth in my body that I was unaware of. The doctor said to monitor the growth of the cyst in four months, before assessing whether a surgery would be needed to remove it. I also had to take a blood test to see if it was cancerous. 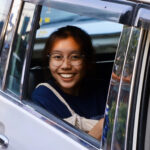 The day before my next check-up four months later, I attended the healing service at our church. I was prayed for by two ladies, who also kindly asked me for my appointment timings and said that they would be praying with me during my appointment. My family also prayed for God’s healing power over me.

The next day, as I went for the ultrasound scan and waited for the results, I had a sense of peace and calm over me. I did still think that it would be really great if the cyst could reduce in size. And by God’s amazing grace, the doctor announced that the cyst was no longer there! It was immeasurably more than I could hope for!

God is indeed in control of every situation in our lives, and I pray we will learn to trust and lean on Him more.