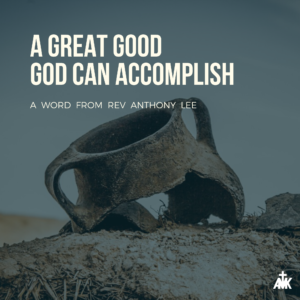 Joseph thought his life ended when he was delivered into the pit. In the end, he became his family’s deliverer from the pits of death. That journey led Joseph to declare, “You intended to harm me, but God intended it for good to accomplish what is now being done, the saving of many lives” (Gen 50:20 NIV).

When persecution came against the early church, the Roman Empire expected Christianity to end. On the contrary, Christians were dispersed and preached the Gospel everywhere. Similarly, many people thought the church in China would die when foreign missionaries were expelled in 1950-1951. Instead, against all odds, the church grew exponentially. Indeed, as early church father Tertullian wrote, “The blood of the martyrs is the seed of the Church” (Apologeticus, Chapter 50).

Satan presumed he had won when Jesus was crucified. In reality, it was Jesus who prevailed because He would rise from the dead. Praise the Lord!

The Church is once again criticized and persecuted, as it has always been. But remember, as 2 Corinthians 4 declares,

7 But we have this treasure in jars of clay to show that this all-surpassing power is from God and not from us. 8 We are hard pressed on every side, but not crushed; perplexed, but not in despair; 9 persecuted, but not abandoned; struck down, but not destroyed.

Let’s always respond with grace, kindness, forgiveness, and generosity as Joseph did, and may we be used mightily by God in this terrible trouble to accomplish great good.